ABB cooperates with Irisbond to invent the eye control robot

ABB in Switzerland, one of four large industrial robot families, cooperates with Irisbond, the Spanish eye tracking software developer, to jointly create a robot controlled by eyes. This robot is in the concept demonstration phase. The user can control the robot manipulator by moving eyes at work. When using, people only need to stare at the chessboard with the same layout as the physical chessboard on the screen and make the physical components of the manipulator by staring at the specific components and spots on the chessboard. This invention is of significance to help the paralytics whose hands are difficult to move play chess. 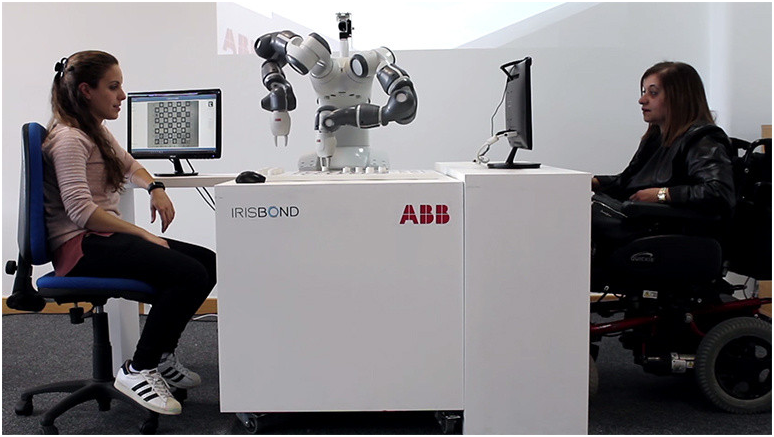 As shown in the picture above, this type of robot has a white body, its head is provided with a camera, and the mechanical arm is black and has many degrees of freedom and can move flexibly after receiving instructions. The robot hand has two "fingers", and can complete actions of taking chess pieces, synergically moving to the instructed position with arms and playing chess. Irisbond, a Spanish technology start-up company, provided the technical support for the eye control software of this project. The company's eye tracking technology is mainly based on infrared eye tracking technology, emitting the infrared light, then shooting with a camera and analyzing the change to the reflected light of the user's eyes. In the aspect of application, this technology can not only be used to play chess, but also help the disabled communicate with the outside world through the eye control.